Showing posts from May, 2012
Show all

The Police are Here 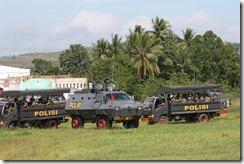 For weeks we have been given promises that the land issue would be resolved, “the next day”.   However, always another excuse arose.  Delay after delay, excuse after excuse.  For over 4 months now, airplanes have not been able to use this runway that we live on.  So on Wednesday night when we had word yet again that Thursday would be the day, it was hard to really believe. Thursday morning in rolled 3 big police trucks.  Over 60 police were here to protect while the rocks and tall grass were taken care of.  Within an hour a truck load of men and women from the mountains arrived.  Soon 7 weed eaters were running and sickles were swinging.  The mountain people are known for their hard work ethic.  And work they did, men and women alike.  All day long they cut, hauled rock, and raked.  Now even though we did not put the rocks there or prevent the mowing, we at aviation get to pay for all the workers, food, tools, etc. etc. We were all looking on …. at last, it seemed unreal. Can you
Post a Comment
Read more 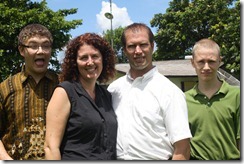 Despite having 6 to 8 boys running through the house this week,  I did steal away on Monday for 1/2 a day to volunteer at the clinic and feed my soul with some medical grown up time.  It was another great morning of learning.  Saw everything from funky rashes to Dengue to Giardia to dizziness to laceration to fevers and more rashes to menopause to well baby check to …….  I was humored as Dr. Di’s teenage daughter came in to assist and ran around the clinic all morning barefooted.  Then at one point I found Dr. Di not in her shoes either.  Later I brought her flip flops to her and commented that she was the first Dr. I have worked with in 20 years that has been barefooted!  At another point in the morning her daughter and I were having a terrible time getting the CBC (complete blood count) machine to work and after 3 pokes to myself and reading the instructions we finally had success.  We laughed and told Dr. Di that her help was only as good as she paid for (we are volunteers).  Fortun
Post a Comment
Read more

- May 18, 2012
Confidentiality has always been a word that has had to be obeyed in my "grown up" life.  Always it is talked about in hospital/clinic settings.  As a pastor's wife, I had many opportunities to learn to keep things confidential in the church setting, also. So now that I am beginning my journey at the mission clinic, Confidentiality takes on a whole new meaning, because the missionary community is very close knit.  Even though there are over 1,000 foreigners working here, we are brought together closely due to our social needs and our children's needs.  So as friends come into the clinic it is at times can feel a bit awkward.  However, we (the professionals) are good at putting on our professional hat and then it all becomes business.  When John showed up at the clinic 3 weeks ago, I promised I would not write a blog about him.  Who knows how many x-pats are reading my blog?  chuckle  But John.....this problem of yours is now effecting my family quite personally so
Post a Comment
Read more

- May 16, 2012
Darron swept home on a Sunday evening and by 1:45 on Monday he and Aubrey were off to Jakarta.  My heart was in a turmoil of emotions.  One:  my husband was leaving again after being gone 12 days.  Two:  my son was flying 8 hours away to have surgery in a foreign city and I WAS NOT GOING TO BE WITH HIM.  I knew this upon making the decision that Darron would go instead of me.  However, the reality of it was quite painful.  At the airport I gave that boy a big hug and kiss and tried to be as brave as a Mom can be. They finally crawled into bed at 1:30 a.m. (Papua time, Jakarta is 2 hours earlier then us).  The guest house where they are staying is no comparison to the first guest house where we stayed upon first arriving to Jakarta, 9 months ago.  Both Darron and Aubrey have commented on how clean it is and they do your laundry and serve you breakfast. At 9:30 the following morning, after an hour taxi ride, more x-rays were obtained of Aubrey's hand.  The surgery was then slated
Post a Comment
Read more

For a Love as Strong as a Mother

- May 12, 2012
I am just imagining stores filled with reminders to buy your mother a card, or some flowers or candy….anything, just something special.  Here, at the end of the earth, there are no reminders only memories and hopes of future gatherings.  My heart brims with gratitude every time I think of my mother.  She has always been such a stable part of my life.  Ever ready to listen to me ramble on and on about my woes and concerns.  Believing in my every success.  This lady that I call my mother, transitioned our family from America with great strength.  She gave up her own goals and ambitions to home school my brothers and I with complete daily devotion.  When cancer threatened her body at age 40 she faced it with a positive attitude and faith.  Mother let us go when we wiggled and kicked in late teen years for freedom.  She did not make us feel guilty for wanting our independence, even though I’m sure she wanted to hold us tightly. Today, I can always count on the fact that my mother will p
Post a Comment
Read more 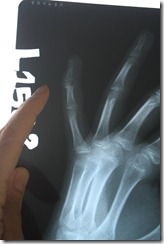 As the x-ray took the fourth set of pictures of Aubrey’s finger (in the last 3 weeks) I caught his eye through the little looking window and indicated with a wink that he should close his eyes.  Something that they always tell him to do here.  It wasn’t long until x-ray results were in our hands and we were holding them up to the light to see how the healing process was coming along.  The radiologist told me in Indonesian, “It’s still broken, they need to make it straight.”  Clearly the bone was not healing and it still had a 25-30% deviation.  That afternoon we drove over to our American doctor’s house.  She sent the boys out to look at their new baby goats and puppies.  Meanwhile she looked at the x-ray and stated that she would scan it and send it off to doctors in Singapore and Jakarta to get their opinions.  I could tell by her intonations and wording that surgery was in Aubrey’s future.  I had brought her fresh lettuce (a rare find), broccoli (fresh from PNG) and lentils (from
Post a Comment
Read more I’ve known him now for over 18 years.  He knows my deepest dreams and my biggest fears.  He has heard of my frustrations, my anxieties, my concerns, my joys, my anger, my sorrow, my victories and my failures.  He has seen me at my best and unfortunately at my worst.  He knows my strengths and my weaknesses.  And he is crazy about me. I also know him, better then anyone else.  I like to finish his sentences, because sometimes he pauses too long, for impatient me.  I have always admired that he knew his calling completely.  I have also admired his Boyd determination.  He can stick with something when most of us would throw in the towel.  This man takes great steps to preserve his integrity, to spend time with his family, and to bless me with his devotion. He is always the first to say he is sorry. He has more dreams and ambitions then I can keep up with…. Currently, he is away on a twelve day trip.  He will then be home 1 1/2 weeks and then gone again for another 12 days.  We shall ea
1 comment
Read more 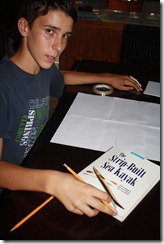 Three weeks have ticked by since Aubrey’s finger break.  Sometimes the time has ticked slowly as he is so limited in what he can do.  Other times the clock has rushed forward, as life does regardless of the circumstances.  Aubrey has no pain now. So we need to have a follow up x-ray and see if he is cleared by the Dr. to start using.  It clearly has some abnormal alignment and calcifications.  The next few weeks will reveal much.  Lately, Aubrey is completely engrossed in drawing up the plans for the strip kayak that he and Darron will make together.  They are inspired by another missionary here, who has made two exquisite kayak’s.  They have been lent the book and already Aubrey has spent at least a dozen hours reading and preparing the plans.  The missionary friend, guesses that his first boat took him 2000 hours, the second boat half that time.  Another pass time, is a teacher at the International school gave Aubrey and Andrew all her extra stamps.  Perhaps this is almost a lost hob
Post a Comment
Read more
More posts